Our walk secretary’s toughest trip ever 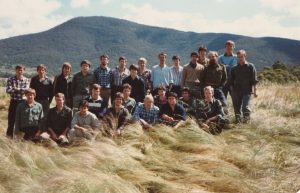 Our group of 24 adventurers with two instructors. I am standing at the far left.

Long before I joined YHA Bushwalking, I attended an Outward Bound Course in the A.C.T. consisting of four days at the Outward Bound School in Tharwa, south of Canberra, followed by a three-week expedition through the nearby ranges. I was one of 24 guys from around Australia, none of whom I had met before. For the expedition, we were divided into two groups of 12, each with an instructor.  We were required to keep a journal of our experiences, so here are the edited highlights (and low-lights) of my trip:

Days 1-4: We were transported from Canberra to the Outward Bound School (in something resembling a cattle truck) where our days were filled with preliminary training and preparation for our expedition and various other activities such as running, swimming in the Murrumbidgee River and ropes confidence courses (it felt a bit like being in the army).

Days 5-9: Our long “expedition” began with a hike from the school to Perkins Flat on the Goodradigbee River, camping overnight in the bush under a large bivvy (a plastic sheet tied to trees or the ground, instead of a tent). Along the way, we gained further training in navigation, first aid, communications and climbing the rope ladders we would use caving in a few days.

Day 10: Canoeing and Cascading down the Goodradigbee: While our gear was transported to our next campsite, we travelled there via the river, canoeing in the morning and cascading in the afternoon. I enjoyed canoeing but cascading was my worst experience of this course.  “Cascading” involved paddling down the river on a lilo using our arms and hands as paddles. We were fully clothed, chest down, which meant we were partially submerged much of the time. The theory was that by wearing predominantly woolen clothing, wool when wet still keeps you warm, however in practice, I wore an old footy jumper and it didn’t do the trick. I’ve never felt so cold in all my life. We were on the river for several hours and the longer I paddled the weaker my muscles felt until I was coming off my lilo after every rapid.  Finally, after I came off yet again, I really struggled to fight my way back to the surface – for a few seconds I thought I wasn’t going to make it, but somehow I managed to get myself over to a large rock.  By now, I was so cold that I was breathing heavily as though I had just completed a hard run. In no uncertain terms, I informed our instructor that there was absolutely no way I was getting back on that lilo, so the whole group had to deflate our lilos and walk the remaining distance to our campsite – interestingly, I heard no complaints from the others about this.   Tonight, one guy became sick and was driven back to Tharwa to recover. 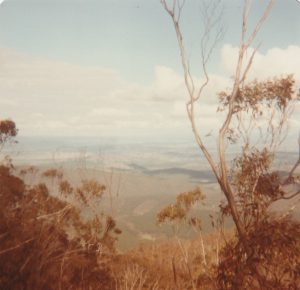 View from Mt Coree, near my “Solo” campsite

Day 11: Another guy woke up sick (should anyone be surprised?), so we lost a lot of time waiting for him to be collected by the Outward Bound staff, before hiking as far as we could to our next campsite.

Day 12: Cascading down the Goodradigbee with packs: We spent the whole day cascading downstream to our next campsite, 15-20 kms away. This time, I wasn’t as cold because we paddled chest-down on our waterproofed packs placed on top of the lilo, so we were mostly out of the water. It also helped that I wore a warmer woolen jumper hand-knitted by my Mum (unfortunately it was ruined after a full day wet with river water, much to her distress when I returned home). Although it was better than my previous cascading experience, my journal states that I was nevertheless damn glad to get off my lilo at the end of the day, however I was better off than another guy whose pack sank to the bottom of the river and couldn’t be found.

Days 13-14: Caving at Wee Jasper. Our instructors had some interesting challenges in store for us through three caves. The largest began with a 60-80 foot descent down a caving ladder, followed by an extensive tour including various obstacles to climb over and narrow holes to squeeze through. However, the most daunting was a smaller cramped cave, where our instructor took us some distance inside then left with our torches, requiring us to crawl much of the way back in the dark, feeling the cave walls, looking for light and calling out to each other until we eventually found the way out. 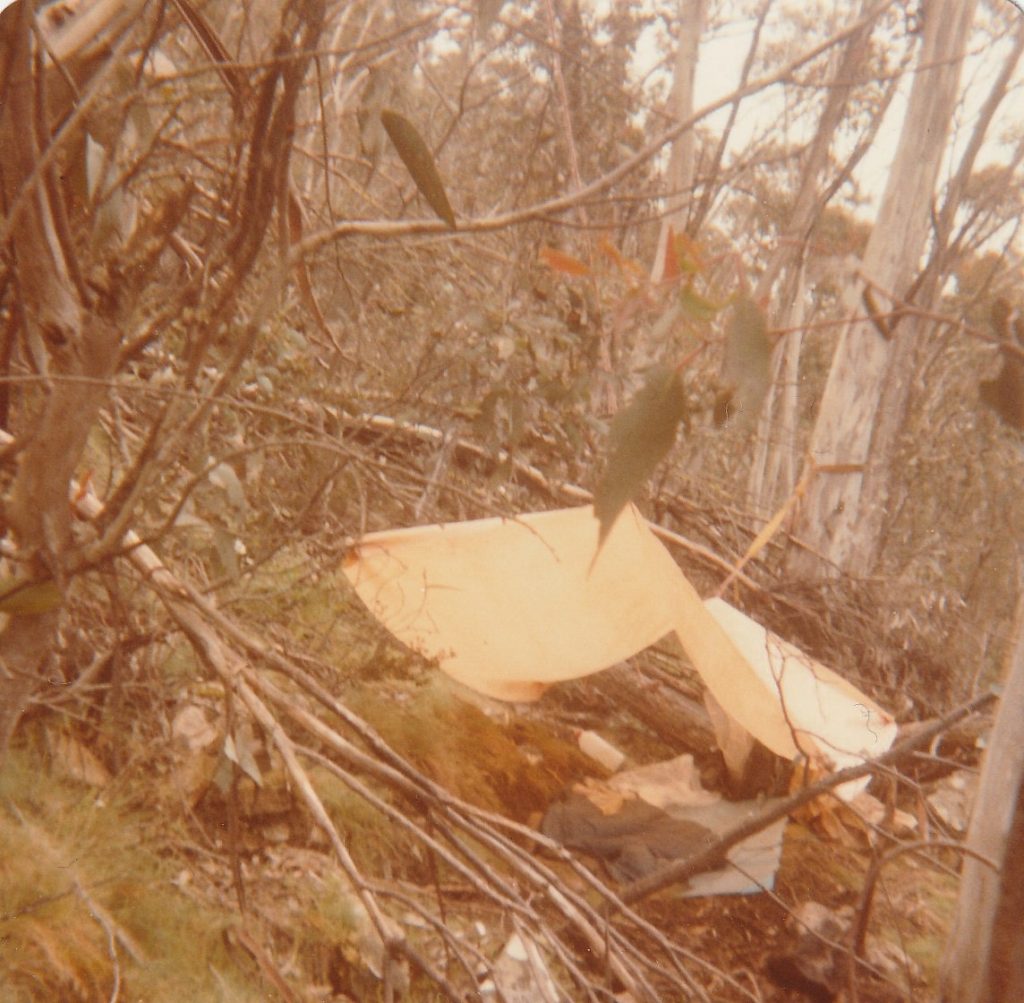 My home during three days on “Solo”

Day 15: A long hike from Wee Jasper to Mt Coree.

Days 17-19: Our “Solo” experience, consisting of three days and nights on our own in the bush around Mt Coree with its commanding views towards Canberra. We had only our camping gear, food rations, notepad and pen.  We had to make do without a watch, any reading material or alcohol (in fact, that was banned for the entire course). Worse than that, we had to survive without our addictive mobile devices (actually there was no such thing in those days but why let the truth get in the way of a good story).  We weren’t permitted to roam any further than 50 metres from our campsite, and we didn’t speak to anyone except for saying ‘yep’ to our instructor on his daily walk by to check we were OK. Yes, this was self-isolation and social distancing on steroids (we were way ahead of our time).

Days 20-24: Our “Final Expedition”, a five-day pack-carry (to use YHA Bushwalking-speak) from Mt Coree to Angle Crossing on the Murrumbidgee River. We were now in groups of six without our instructor so we had to use all our training and team work to navigate our way using map and compass (there were no luxuries like mobile devices with GPS!). From my journal, it looks like this was mostly cross-country, other than using a few roads to make up time. My journal also says I was glad when this final expedition was over! 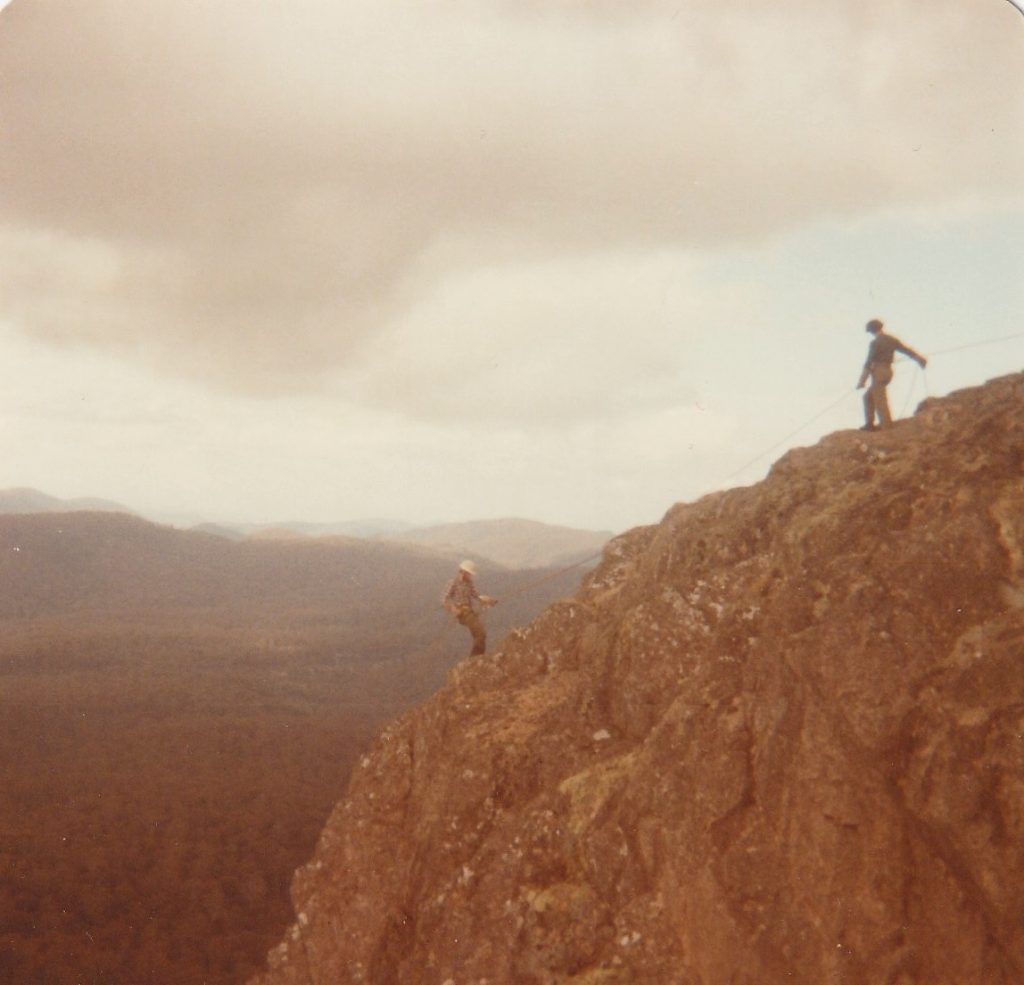 Day 25: A 12 km run from Angle Crossing back to the Outward Bound School. A run of this distance would normally have been easy for me, but I struggled – I must have been exhausted by this stage. Tonight we enjoyed our final dinner, which we prepared ourselves of course (after all, this was ‘outward bound’, not a tour group!).

Day 26: All 24 of us were trucked back to civilization in Canberra (yay!). We indulged in a pub lunch, alcohol and ice-cream before flying home.

According to my journal, I enjoyed most of the course, except for certain activities such as the cascading and the more grueling parts of the hiking when my pack felt so heavy that I wondered what on earth possessed me to decide to do this course (could this explain why I don’t attempt pack-carries these days?).

A few weeks after coming home, I was diagnosed with Glandular Fever and was off work for a month.  My GP concluded that I must have contracted it on the Outward Bound Course. Apparently we weren’t vigilant enough with the good hygiene practices that we all follow today! 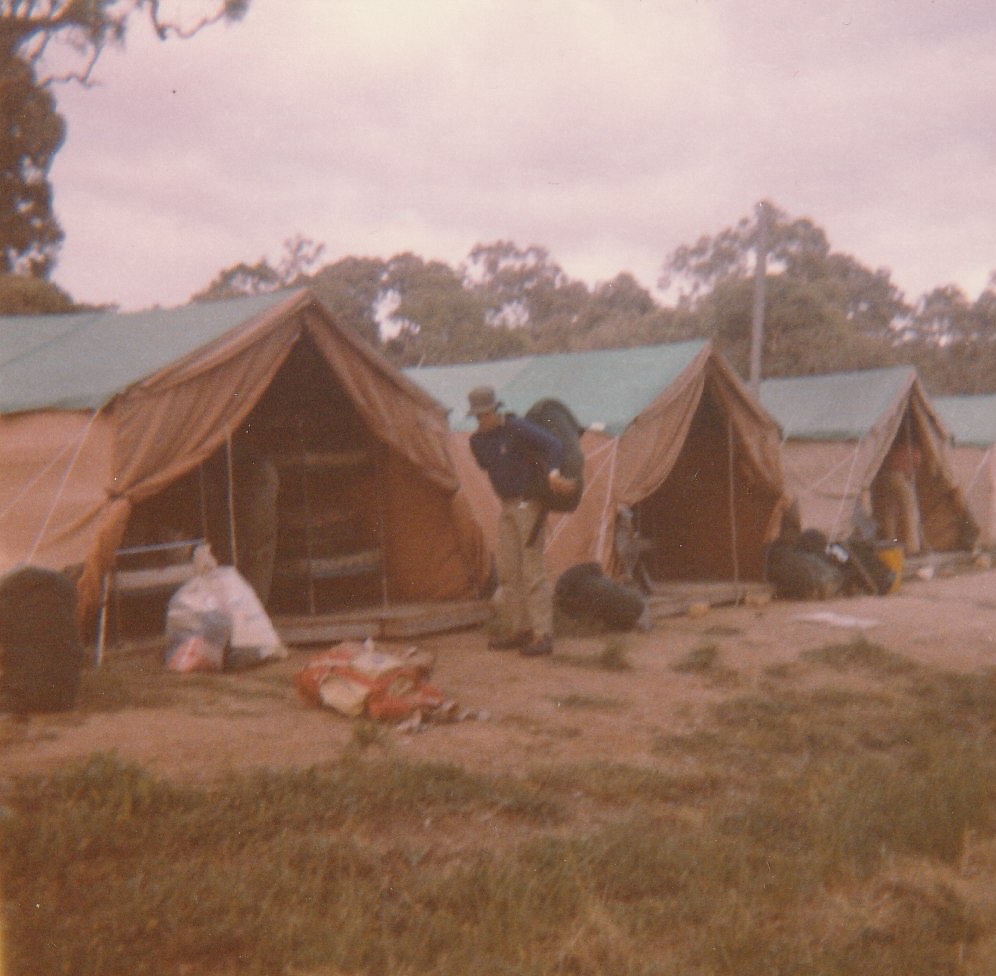 Our quarters at the Outward Bound School